Please join us for the January installment of the 2017-2018 Mesoamerica Center Colloquium Series! This month's lecture is organized in collaboration with UT's Department of Geography and the Environment.

Join us for a presentation entitled "Imagery of the Yearbearers in Maya Culture and Beyond" by Dr. Susan Milbrath, Emeritus Curator of Latin American Art & Archaeology at the Florida Museum of Natural History.

Free and open to the public. 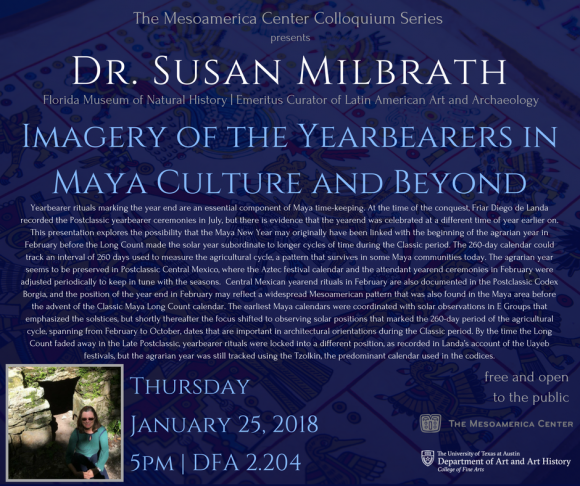 Yearbearer rituals marking the year end are an essential component of Maya time-keeping. At the time of the conquest, Friar Diego de Landa recorded the Postclassic yearbearer ceremonies in July, but there is evidence that the yearend was celebrated at a different time of year earlier on. This presentation explores the possibility that the Maya New Year may originally have been linked with the beginning of the agrarian year in February before the Long Count made the solar year subordinate to longer cycles of time during the Classic period. The 260-day calendar could track an interval of 260 days used to measure the agricultural cycle, a pattern that survives in some Maya communities today. The agrarian year seems to be preserved in Postclassic Central Mexico, where the Aztec festival calendar and the attendant yearend ceremonies in February were adjusted periodically to keep in tune with the seasons. Central Mexican yearend rituals in February are also documented in the Postclassic Codex Borgia, and the position of the year end in February may reflect a widespread Mesoamerican pattern that was also found in the Maya area before the advent of the Classic Maya Long Count calendar. The earliest Maya calendars were coordinated with solar observations in E Groups that emphasized the solstices, but shortly thereafter the focus shifted to observing solar positions that marked the 260-day period of the agricultural cycle, spanning from February to October, dates that are important in architectural orientations during the Classic period. By the time the Long Count faded away in the Late Postclassic, yearbearer rituals were locked into a different position, as recorded in Landa’s account of the Uayeb festivals, but the agrarian year was still tracked using the Tzolkin, the predominant calendar used in the codices.

Susan Milbrath is the Emeritus Curator of Latin American Art and Archaeology at the Florida Museum of Natural History at the University of Florida. She received her Ph.D. from Columbia University in Art History and Archaeology, and has been awarded numerous grants for exhibitions and curatorial projects, and was most recently funded by an NEH grant for on-line access to the Cerros collection of Maya artifacts transferred to the Florida Museum of Natural History in 2009. She was an affiliate Professor of Anthropology from 1996-2017 at the University of Florida. For the past decade, she has been studying the symbolism of Mayapan effigy censers in relation to calendar ceremonies and imagery in the Postclassic codices. Representations of eclipse cycles and seasonality in Postclassic codices are also areas of interest. Her book ​"​ Heaven and Earth in Ancient Mexico: Astronomy and Seasonal Cycles in the Codex Borgia, ​"​ was published by University of Texas Press in 2013. Another of her University of Texas Press books, ​"​ Star Gods of the Maya: Astronomy in Art, Folklore, and Calendars, ​"​ was first published in 1999 and still remains in print. She continues to conduct research Mesoamerican astronomical imagery in a broader context, and her most recent book is an edited volume entitled ​"​ Cosmology, Calendars, and Horizon-based Astronomy in Ancient Mesoamerica, ​"​ published by University Press of Colorado in 2015. Her most recent research on the development of the Preclassic calendar was published by Latin American Antiquity in 2017.