The Mesoamerica Center is proud to present The Lienzo de Quauhquechollan.

The Lienzo de Quauhquechollan is a pictographic painting on cotton cloth, created circa 1530. The Lienzo is considered the first map of Guatemala. It is also the only firsthand indigenous account of the conquest of Guatemala, and one of the few sources to record the military campaigns of Jorge de Alvarado in 1527–1530.

In 1520, the leaders of Quauhquechollan (today San Martín Huaquechula in Puebla, Mexico) formed an alliance with the Spanish, hoping to improve their social and political situation and to oppose Mexica (Aztec) oppression.

After the victorious campaign by the allied armies, the Quauhquecholteca painted the Lienzo to document their role in the conquest of Guatemala and confirm the privileged position they sought as co-conquerors in the new political system.

The exhibit of the Lienzo de Quauhquechollan brings to life this untold story of Guatemala's conquest.

The exhibition coincides with the 2013 Maya Meetings and will be on display until March 2013. 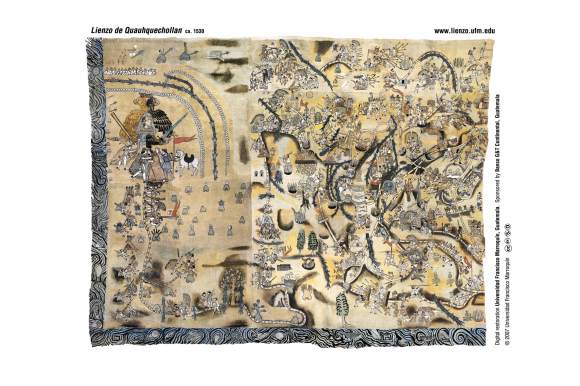 In 2006, Universidad Francisco Marroquín, with the sponsor of Banco G&T Continental, embarked on a project to bring the Lienzo de Quauhquechollan to Guatemala, so that Guatemalans could learn, from this primary source, about the history of their country.

UFM decided to create a digital version of the Lienzo together with an exhibit that could travel around the country (and the world). One thing led to another, and the project expanded into a full-blown digital restoration.

Deterioration of the original Lienzo has made many symbols and scenes difficult to understand, even when closely examined by experts. Modern technology has allowed the Lienzo de Quauhquechollan to be restored to an extraordinary depth and level of precision that would have been impossible to achieve on the original without destroying the cloth in the process.