Following the documentary,we will host a Q&A section with Dr. Rhonda Taube, Producer of the film. Join us at The Harry Ransom Center on Wednesday, January 14 at 5:30 pm 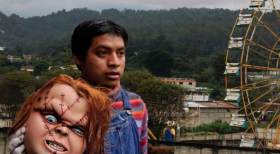 In the muddy market square of Momostenango, Guatemala, where shamans burn offerings in the shadow of the Catholic church, a bizarre spectacle is arriving. Horror movie monsters jostle through the crowd, followed by Mexican pop stars, Japanese game avatars, and dictators from the dark years of the 1980s. Unlike the folkloric performances long studied by anthropologists, the new Disfraz dance won’t show up on any postcard. In some villages, it’s even been banned for the way it frightens tourists. So how did these fiberglass masks of Xena: Warrior Princess come to be blessed in the smoke of Maya altars? Gods and Kings is a film about a little town in the mountains and the great empire to its north, a story of conquistadors, tricksters, sorcerers and advertisers. In a town where Chucky from Child’s Play is a real evil spirit that appears in people’s nightmares, stories are a serious business, and it always matters who’s telling them.