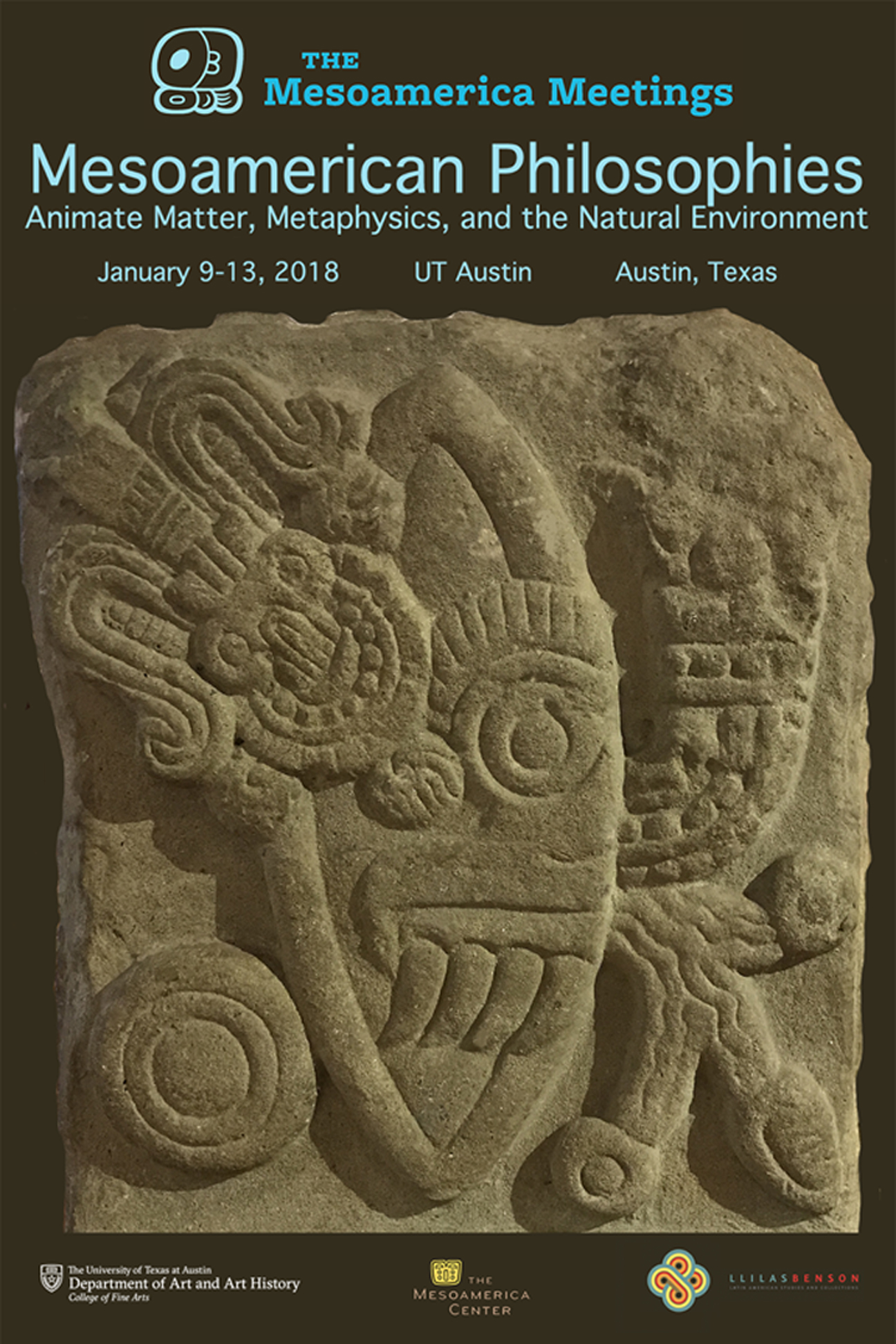 Forty years ago, in 1978, UT Austin hosted the first Maya Hieroglyphic Workshop by Linda Schele, and an institution was born. Over the years the annual event grew as an open and vibrant gathering of scholars, students and others, sharing in the newest research in (mostly) Maya art, archaeology and related disciplines. 2018 brings exciting new changes, marking not only the beginning of our third k’atun, but also our new identity as the UT Mesoamerica Meetings, emphasizing the interconnectedness of all Mesoamerican cultures. To celebrate our anniversary and our new direction, we will devote our 2018 conference to a novel topic: Mesoamerican Philosophies: Animate Matter, Metaphysics, and the Natural Environment.

Ancient Mesoamerican religion and worldview hinges on a special understanding of “matter” and the metaphysical expression of the sacred. The world and what inhabited it – landscapes, buildings, objects, illnesses, even time itself -- were considered animate and “living” in some sense, creating a dynamic system of interactions and relationships between people, gods, and things. These ideas found a constant expression, at different scales, in the region’s art, imagery, architecture, and ritual deposits, yet it is fair to say that these elemental notions have not been organized as a cohesive philosophy in any systematic way. At the 2018 Mesoamerica Meetings scholars and students will bring ancient Mesoamerican philosophy and religion into sharper focus, looking at how the ancient Maya, Aztecs, and other Mesoamerican cultures communicated these important ideas, and developed many notions of their own. In short, the conference will be looking at some of the most foundational but least articulated concepts of a cohesive ancient Mesoamerican worldview.

Among the questions we will be asking are: How do we refine our picture of Mesoamerican ideas as a cohesive system, a philosophy that might be placed alongside other ancient traditions worldwide? How did Mesoamerican peoples represent and interact with “living” things, spaces, materials and landscapes to express their understanding of human action in an animate world? Can we come up with a more accurate idea of “animism” in describing aspects of the Mesoamerican worldview? In what ways do such ideas have direct bearing on archaeological interpretation? These are large issues, and other related questions will no doubt arise during the conference. We see it as the beginning of a new and necessary foray into defining Mesoamerican thought as a set of philosophical traditions with key repercussions in scholarly research and cultural understanding.