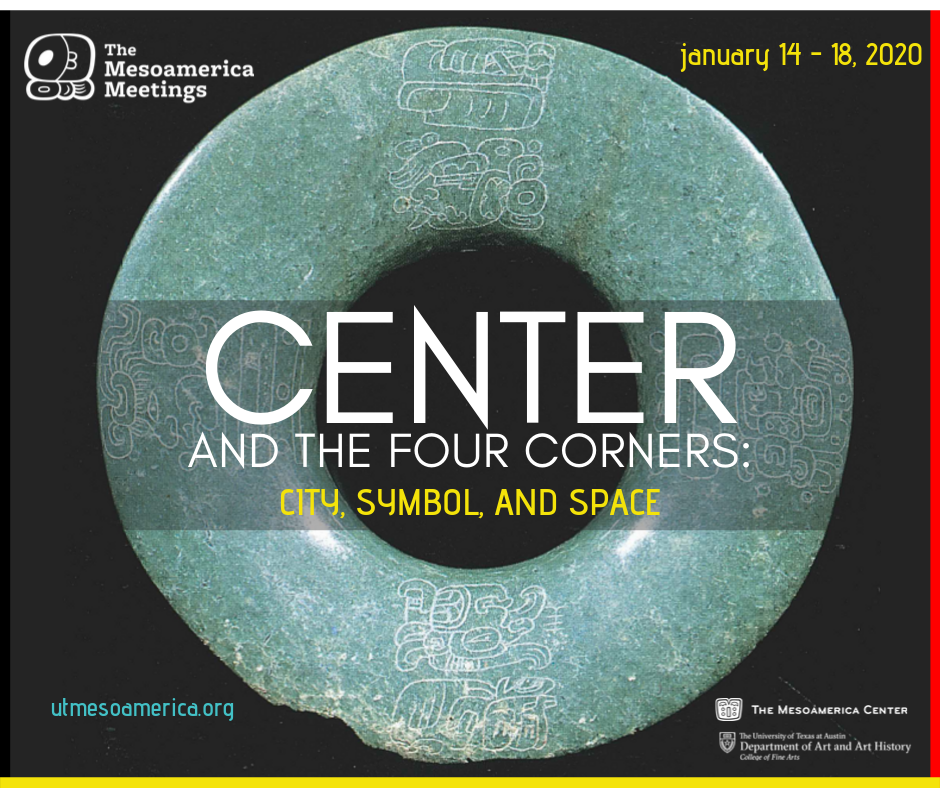 CENTER AND THE FOUR CORNERS: CITY, SYMBOL, AND SPACE

The 2020 Mesoamerican Meetings will explore the structures and symmetries of the ancient Mesoamerican cosmos. Over the course of nearly three millennia the basic world model of a center with four sides or quarters exerted a great influence on urban design, architecture, and numerous artworks, and it continues to be represented today in many ritual settings. The idea of centrality or a “world navel” emerges as one of the most important operational principles in Mesoamerican concepts of space, tied to the earth and to the movement of the sun. Archaeologists and art historians often use these spatial and cosmological models to interpret the remains from the ancient past, and to explain the layout of space in architecture, the associations among objects in caches and burials, or the ideas expressed by images and visual elements. The models at the core of these interpretations, seldom explicitly described, are the focus of this year’s theme. What are their histories, and how did different ancient Mesoamerican cultures structure such ideas of time and space?

Some of the answers to these questions may be found in new analyses of ancient urban spaces, both the large cities and the small centers for community and ceremony. Beyond cityscapes, this year’s theme also includes ancient Mesoamerican concepts of directionality in landscapes, such as mountains, sources of water, and features that define the relationship between people and the world around them. For many ancient cultures of Mesoamerica movement through the landscape also carried meaning, reflecting concepts about reading order, and patterns of solar and celestial motion. The making of “place,” be it physical or imagined, also linked people with broader spatial and cosmological models through directional movement in pilgrimage, dance, boundary marking, and the creation of new spaces, like plazas and agricultural fields.

These examples express some of the range of topics that can investigate ancient ideas and mental maps of a quadripartite world.  Many of our presentations in The 2020 Mesoamerica Meetings will address these overlapping features of cosmology, sacred geometry, and structural symmetry, all in order to better define spatial relations and their representations.