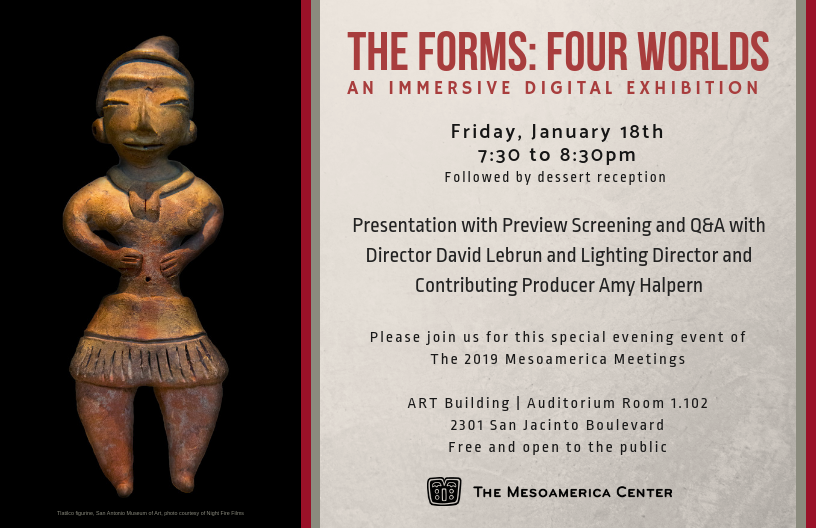 We are thrilled to bring you an evening event with the producers of Breaking the Maya Code, and Out of the Maya Tombs – two of the most well-known and loved documentaries on the ancient Maya!

Join us at 7:30 pm on Friday January 18th in ART 1.102 (the same auditorium where the Symposium talks are held). The presentation will be followed by a dessert reception in the atrium outside the auditorium.

David Lebrun of Night Fire Films will present his current work in progress, The Forms: Four Worlds, an immersive multimedia museum exhibition using animation to trace the evolution of images and archetypes from the Lower Paleolithic through the late Middle Ages in four world cultures: ancient Mesoamerica, ancient to medieval Europe, the ancient and Islamic Middle East, and Indian Asia.

The animations at the heart of The Forms: Four Worlds are created from thousands of high-resolution images of artifacts, art objects and architectural details, photographed in museums, churches, temples and archaeological sites. These photographs are precisely aligned and animated through techniques ranging from slow, meditative morphing to rapid, almost hallucinatory cascades of coherent images. The animations explore iconographic subjects that have been portrayed by artists since humans first created images on bone, stone and the walls of caves – representations of our bodies, of the visible world around us and of the invisible worlds of belief and cosmology.

In keeping with The 2019 Mesoamerica Meetings theme on Dress Codes, Lebrun will screen one of these animations in full: “214 Figurines from Tlatilco and San Pablo”, based on photography of hundreds of figurines in US and Mexican museum collections.  These figurines show a wide array of headgear, jewelry, dress and undress.

David Lebrun has served as director, writer, producer, cinematographer, animator and editor on more than sixty films including films on the Mazatec Indians of Oaxaca, a 1960s traveling commune and Tibetan mythology. He served as editor on the Academy-award winning documentary Broken Rainbow, about the Hopi and Navajo of the American Southwest.

Lebrun attended Reed College and UCLA Film School. He comes from a background in anthropology and philosophy, and many of his films are attempts to get inside the ways of seeing and thinking of specific cultures, combining techniques of documentary, experimental and animated genres to create a style appropriate to the culture and era of each film. Several of Lebrun’s films are explored in detail on the Night Fire Films website, including Breaking the Maya Code, Out of the Maya Tombs / Dance of the Maize God, and Proteus.

Amy Halpern is Lighting Director and Contributing Producer for Four Worlds and previously served as Cinematographer and Contributing Producer on Breaking the Maya Code and Out of the Maya Tombs. Halpern has done cinematography and/or lighting on numerous dramatic and documentary films, including Charles Burnett's My Brother's Wedding and Pat O'Neil's The Decay of Fiction. As an independent filmmaker she has created more than 20 short films and the feature length Falling Lessons. She has collaborated with Lebrun and others on the design of numerous multimedia projects and museum and gallery installations, including the installation Invisible Writing, commissioned by MOCA Denver for their 2012 traveling exhibition West of Center.